The knowledge diffusion research examines how the new knowledge is diffused (spread) in the society. The knowledge is get diffused in the form of ideas, innovations, technology, products or practices, influencing the individual adopters. The knowledge is adopted by the adopters in time gaps as the adopters are reluctant to adopt new knowledge until and unless they are satisfied that new knowledge is more effective as compared to the existing one. Thus, the adoption rate highly depends on the influencing power of the knowledge. The history of diffusion studies can be traced to the 1903 when French Sociologist Gabriel Tarde, plotted the original S-shaped diffusion curve, followed by Ryan and Gross in 1943, introduced the adopter categories which was later used by Everett Rogers in the first edition of his book entitled Diffusion of Innovations published in 1962 (Kaminski, J. 2011). The various diffusion models are discussed below in details:

Everett M. Rogers in his book Diffusion of Innovations (3rd Ed.) described diffusion as a diffusion of innovations. According to him, “diffusion of innovations is the process by which an innovation is communicated through certain channels over the time among the members of a social system”. Therefore, it is a special type of communication, in which the messages are concerned with sharing of new ideas to arrive at the mutual understanding and convergence (or divergence) among the individuals’ exchanged information in order to move towards one another. The diffusion process by an alteration in the structure and function of the social system brings social change in the society (Rogers, Everett M., 1983).

Diffusion of innovation is a special type of communication as it is intentionally held between the sender and receiver through a medium/channel over a period of time. Roger had explained the following four components in the diffusion process:

i) The Innovation (perceived new knowledge): according to Roger an innovation is an idea, practice or project that is perceived as new knowledge by an individual. For someone who had perceived the knowledge is new to him, it was there before since long ago will be an innovation for him. Uncertainty is the main obstacle to innovation adoption. By adopting or rejecting innovation some changes occur as consequences of adoption in the individual or social system. The consequences can be classified as desirable or undesirable (functional and dysfunctional), direct and indirect, anticipated and unanticipated (Sahin, Ismail 2006). The deterministic characteristics of innovation adoption rate are:

ii) The communication channel (medium): communication is a special activity where two entities are voluntarily agreed to create, share communicate information with each other to reach a mutual understanding. The channel is the medium between sender and receiver that involves an interpersonal relationship.

iv) The Social System (sender and receiver): In a diffusion process social system is the fourth component. It could be defined as an interrelated unit having the common and mutual objective. An individual, group, and organization could be treated as a unit of the social system. The innovations are diffused between individuals, groups or organizations, interrelated and common in nature. Figure 4.3 reflects various categories of adopters. 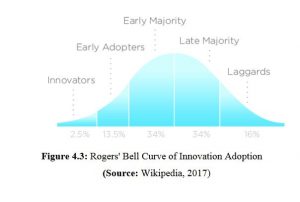 Dr. William Goffman and Dr. Vaun A. Newill in (1964) his article Generalisation of Epidemic Theory had proposed a mathematical modeling of transmission of ideas. They have studied transmission of ideas as the spread of diseases in the population. The base of their study was principles of epidemiology. The necessary elements caused spread if the infection is (i) specified population (ii) exposure to infectious material. The population further classified as (a) infective — hosting infection (b) susceptible- can become infective and (c) removal — due to death, immunity, hospitalization, etc., susceptible or infective at the time of removal. This process of infection is time deepened. The individual can become infective by direct contact or from someone infective. The infection development period is called “latency period” (or incubation period) (William, G. and Vaun, A. N.,1964).

The Price Mechanism is an economic term which determined the price of goods according to the demand and supply of that particular goods or service. In the context of knowledge diffusion here knowledge is managed as goods which are captured in knowledge repositories to be transferred between users and vendors. The knowledge as goods where knowledge is codified and protected under Intellectual Property Rights (examples are written codes, documents, best practices, case studies, research reports, patents, trade licenses, export and import permissions, software’s and consultancy services, etc.).

The knowledge has its economics of acquisition. The price mechanism helps to understand the knowledge preference of an individual. Thus, it provides insight into the study of knowledge transfer which takes place in the hierarchical structure of the organization. It is obliged to the employee to leave the technology or process of innovation (knowledge) at the time of leaving the organization. Bilateral information diffusion also takes place within the organization by practicing the collaborations (joint knowledge creation). Huang, Wang, and Seidmann (2007-08) in their paper have examined the theoretical perspectives of user’s irrational price and knowledge preferences by the economic approach. Can the price mechanism facilitate the knowledge transfer in an economic market. If so, are the knowledge users always rational in their price and knowledge preferences. The paper answered to these two key questions. To explain users’ irrational price and knowledge preferences the economic approach can be utilised to examine two competing theoretical perspectives. User’s preference for commercial repositories and their inconsistent preferences bring new insights for transfer of knowledge. Management of Knowledge transfer is traditionally focused on collaborative organisational contexts. The Market mechanisms seem to be a viable approach for knowledge transfer within and across the organisation to overcome the dilemma of competitive collaboration as the user prefers outsider’s knowledge as to internal competitor. Thus, avoiding internal competition market mechanism brings an opportunity for acquiring diversified knowledge from external competitors (Huang, M., Wang, E.T.G. and Seidmann, A., 2007-08)

The rate of the influence of innovators and imitators for diffusion of knowledge depends on several characteristics, such as complexity, relative, advantage, status value or observability etc. The Bass Model popularly known as Bass Diffusion Model was developed by Frank M Bass (1969) explaining the adoption of a product by the customers over the time through mathematical differential equations. He proposed that the probability of adoption or purchase of a product is linearly based on the number of previous buyers interacting with potential and de facto adopters or users. Because in a social system some individuals decided to adopt as innovation independently of the decision of the individual. Bass Model implies exponential growth of an initial purchase to a peak and then exponential decay. Bass Model is widely used to predict in forecasting of adoption of new product, idea, technology, information, innovation. In literature, the following classes of adopters are specified: (1) Innovators, (2) Early Adopters, (3) Early Majority, (4) Late Majority; and (5) Laggards, on the basis of the timing of adoption by the various groups (Bass, F. M., 1969). The figure 4.4 reflects the growth of a new product. 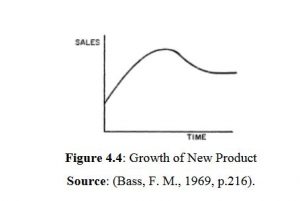 1.5 The Strength of the Weak Ties:

The Strength of the Weak Ties is one of the most cited theories of Social Network theory given by Mark Granovetter in 1973. He explained social network as “a tool for linking micro and macro level of social theory”. The embeddedness between individuals create social networks and lead to social capital. Though the individual is intra-correlated in the group they are somewhat independent (Granovetter, Mark, 1973). Suppose there are two different groups, Group A and Group B (see fig. 4.5) mentioned below. Each of these groups is having individuals directly or indirectly associated with each other. The connecting node between Group A and Group B are X and Y. If the connection between these two gets disconnected, the network nodes will not be able to connect with the nodes of each other’s network. Both the networks are dependent on X and Y for communication to each other network. The tie between X and Y is a weak tie. The weak ties provide us the opportunities to connect with nodes of other networks. 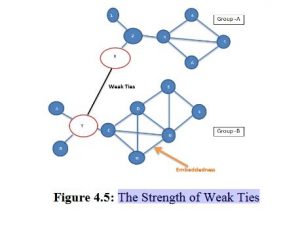 1.6 The Theory of Structural Holes:

R.S. Burt propounded the concept of structural holes popularly in the study of social networks. Burt introduced this concept to explain the origin of differences in social capital. Burt in his theory suggested that individual’s positional advantages/disadvantages are dependent on the embeddedness with the neighbourhood’s or other social structures. In simple words, a structural hole can be understood as a gap between two nodes that have complementary sources of information among the network. As explained above the embeddedness between two networks are depended on X and Y (see figure 4.6) for communication. If this link gets disconnected, it will lead to the break between networks, thus, in the technical term is known as the structural hole (Wikipedia, 2016).

The weaker connections between networks are the holes in the social structure of the society. These holes in social structure create a competitive advantage for an individual. Structural holes are thus an opportunity facilitates the knowledge flow between people that brings together people from the opposite sides of the hole. (Burt, Ronald S., 2000). 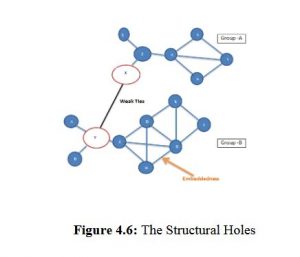